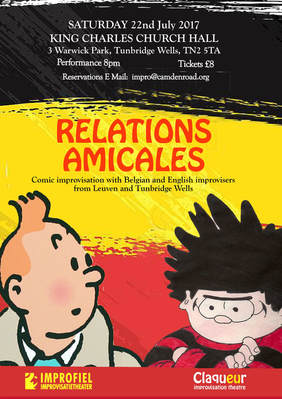 Distraught at the idea of Brexit Claque Impro changed their name to Claqueur to incorporate eu  into their name. Claqueur actor improvisers have been working and performing with German an Polish improvisation companies, and here as part of Tunbridge Wells Belgium week of celebration they were proud and privileged to be performing with Improviel Theatre. The Belgian actor improvisers spent a couple of days seeing the town, hosted by Tunbridge Wells Twinning Association, guests of the mayor, they visited the council chambers and the mayors parlour and attending a day long workshop with Claque. Relations Amiacles, was exactly that, friendly relations and shared humour. We all wonder as we work with these marvellous European groups about what we a doing to even think about breaking out of Europe, Visiting their lovely countries and towns, always being so generously welcomed, why would we not want to stay a part of that. At least we are able to show the Belgians we are bemused and dismayed by Bexit and will always remain in spirit true Europeans 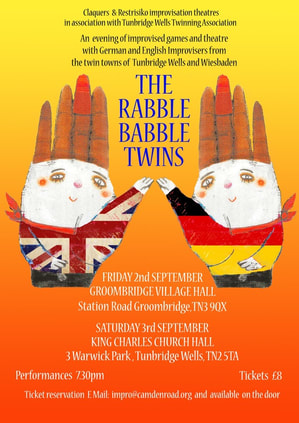 The German Improvisation Group Restrisiko visited us for four days. On Thursday 1st September Restrisiko and the Claquers attended a Mayoral reception in the Town Hall, organised by the Tunbridge Wells Twinning Association. They were entertained by the Mayor in the Chamber, and it quickly turned into an improvisation with guests taking on roles as councillors, and undertaking the ceremony of the Mace.  The two Impro groups were later welcomed, wined and dined by Marie and Franco, our wonderful friends at IL Vesuvio.  On Friday the six members of Restrisiko and 10 members of The Claquer Impro Theatre had a full day workshop followed by the a public performance to a full house in Groombridge Village Hall. There was a second performance on Saturday at the King Charles the Martyr Hall in Tunbridge Wells, equally well attended. The two days of working together were incredibly rewarding. Restrisiko were amazing performing for the most part in their second language. We took the opportunity, however of working some impro scenes in both languages. To the non German speakers it was like running a gibberish game. On Friday we opened with cast members introducing themselves and a full stage of 16 performers playing freeze tag. Restrisiko then an three scenes including a memorable telling of Little Red Riding Hood, (suggested by the audience) told first in three minutes then one, 30 seconds and finally 15. The fairy tale was played in German but because Restrisiko are young very physical and visual company the story was not lost on anyone. Claque played the next three scenes and fished act one with both groups playing a narrated mask scene with music. The second half we worked together. The German English Outsider, a new version of the life game with a couple from the audience being interviewed about, when they met leading to the events that led to their first kiss.  The cast played out the scene, corrected by the couple ringing a bell if they were right and squeezing a horn if they were wrong. A really lovely way of engaging with and celebrating members of the audience. The whole week end demonstrated how the rules of improvisation so enhance lives social skills. Everyone was extremely generous and co-operative and no ego's they all went on stage to make everyone else look good and feel safe.

My wife Becca and I took a trip to Wisbaden in Germany to meet and perform with Restrisiko Theatre Improvisation company. We stayed with one of the companies founders Sybille Schropel and her husband Stephan. Sybille contacted me some months ago via the Tunbridge Wells Twinning Association with the idea of  Restrisiko and Claquer Impro working together. We went over toe discuss the, meet the group and workshop and perform with them. Dreadful weather and truck barricades on route stopped us getting there in time for a workshop so we had to perform without knowing too much about each other. However we had a few hours before hand to meet and do a warm up. They are a wonderful group of people. As I don't speak German they offered to perform in English, but I thought with a German audience they should stay with their own language and I would play it like one would a gibberish scene. We agreed on a long form improvisation format called Funeral. Friends and family of the deceased arrive one at a time and stand in from of the grave expressing a reaction, maybe a relationship and go and sit at a row at the back of the stage. The deceased watches on. Conversations begin, relationships between guests are established, two people step forward and begin a flash back scene, retire back to the wake which continues to develop. then a scene with the deceased. So scenes and the wake develop stories and links. I am mostly unaware of whats going on but I and understanding emotional ties. I'm dragged into a scene and speak English, responding as bet I can. The amusement is as much in the misunderstandings.
The experience establishes at least that we would all like to work together and plans are hatched for them to visit us in September next year and for the Claquere's to reciprocate with a visit to Wiesbaden in late October.

Performances at the Camden Quarter 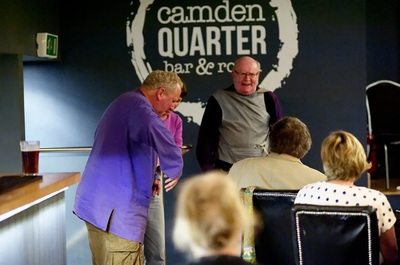 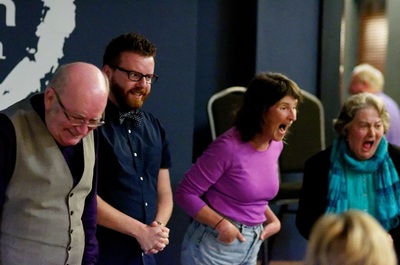 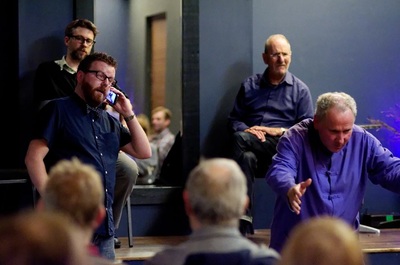 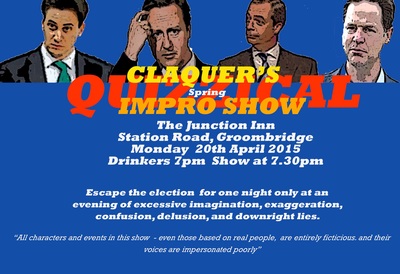 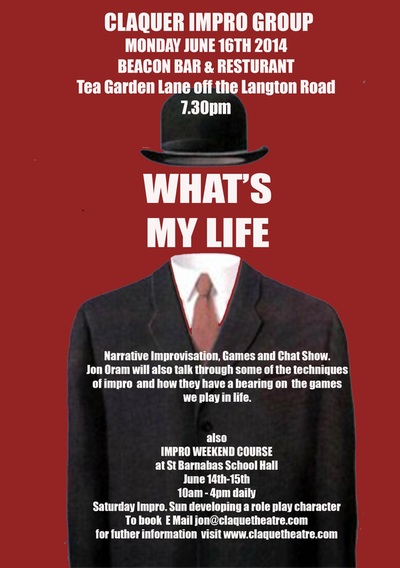 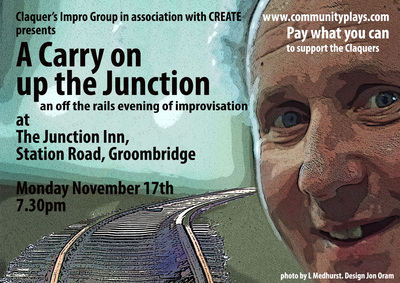