﻿Claque are the founders and leading exponents of community plays. Since 1979 they have been transforming the way in which people view theatre and community through large-scale and inclusive community plays.

“The plays ... are very much about shared energy. It’s an old fashioned notion; a couple of hundred people come together and surprise themselves by what they can do.” Times Educational Supplement

Claque Theatre began life as the Colway Theatre Trust with the production of the Lyme Regis community Play in 1978. The Trust was formed by Ann Jellicoe as a vehicle for exploring and developing the community play as an accessible and innovative form of theatre. In 2000, Colway relocated to Kent and changed its name to Claque to reflect the South East's close proximity to Europe.

Under the direction of Jon Oram since 1985, Claque has produced 50 community plays across the United Kingdom and in Canada, the United States and Europe. The plays are always of high artistic quality which they achieve by working closely with the community over a two year period,, developing skills, researching, and devising in collaboration with with leading playwrights and experienced directors and associates from across the theatre disciplines. Together, the production teams offer design, set and stage management services as well as creative and educational workshops, Empty Gallery installations and events..

PLAY in the MOMENT

Claqueur Impro have been quietly running a series of preview Play in the Moment shows on the last Tuesday of every month at the Rusthall Club. In devising Happy Highways on Zoom we relied a lot on improvisation and began creating  spontaneous scenes some of which felt like stepping into a play.  The Claqueur performers began developing a new approach to their own performances as a result. throughout lockdown and in the the last few months we have been able to practice live. We believe we will be ready and prepared to play them publicly from September.  Play in the Moment is dependent on ‘playing in the moment’. with no forward planning. In effect this puts the performers in the same position as the audience, the story unravels behind them when they ask "what just happened?" as opposed to the traditional method of asking "what happens next? It's improvisation with no rules rather principles. It's the purest form of improvisation, it's like stepping into a play that somehow already exists and discovering rather than inventing who we are playing. We can't tell the audience beforehand whether we will be stepping into a drama or a comedy, whether it will be dark or light, we will discover that in the same moment as the audience. For us it feels thrilling, dangerous and liberating. We are looking for places to perform so if you have a venue give us a call.
Click Here to Visit Claqueur Impro Website

The Art of the Community Play May 2022

I am finally making headway with the book on Community Plays. It's 37 years since Ann Jellicoe wrote Community Plays and How to Put Them On, a  record of the beginnings of the Community Play and a handbook on managing the projects.. An update is long overdue. the work has developed radically over three decades and times are also very different.  The book will outline some major developments in my approach all designed to give the community a more meaningful experience and greater input and investment into the plays. It advocate  much more centrally placed collaborative position for the community , a role define as a social actor., The professional becomes more in the service of the community to give greater credence to them  as creatives and actors and supporting them  in defining the content and shape of their
play. I write about the nature of groups and how working collaboratively as a group and finding the collective intent is central to 'finding the play' and working as an ensemble to implicate the audience in the performance. I draw on my experience in educational drama and describe the Drama Search, a form of group role play to explore research material to inform the development of the script. The books working title is The Srt of The Community Play as it  focusses more on the creative process and the art form more than the  project management. and because I believe it i should be both seen and approached as a serious art form.

DEVISING the play took place over ten months from September 2020. A Devising group met every other Wednesday on Zoom through to June 2021.. They helped with research, developing plot and narrative. A group of community Improvisers met every Monday on zoom  putting flesh on the structure developed by the Devisers.. Happy Highway  was then developed into a theatrical walk through Happy Valley, a beautiful landscape of rocks and woodland on Rusthall Common, near Tunbridge Wells. You can see how the project unfolded by clicking below
MORE ABOUT HAPPY HIGHWAYS 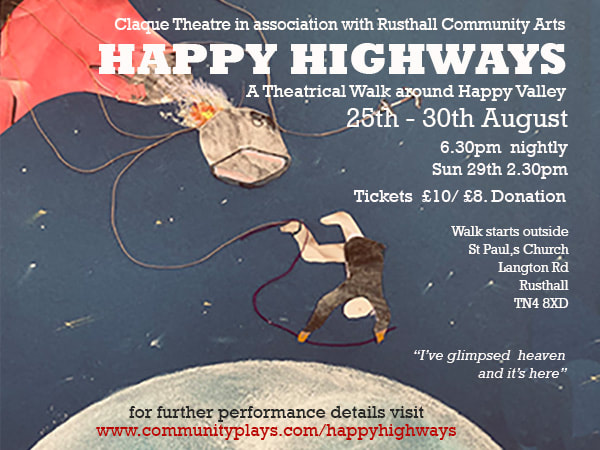 Visit our other Projects

The Empty Gallery produce collaborative projects between Claque and a local community or group to create a mobile 'interactive theatre-art exhibitions' that reflect the lives, thoughts and ideas of the community who create it. The creators could be the community within a city, town, village, street, an organisation, an 'interest group' or your community or group.  Each exhibition varies in content, size, scale and running time depending on the theme, community and location. We start with an empty shop, a village hall, a school, a gazebo, a bus stop, or anywhere at all. Our most recent projects have been The Aldgate Project for the City of London, and The War Time Silhouette for Rusthall Community Arts
Empty Gallery

If you are interested in learning improvised theatre you can join Claque Impro . These are a core twelve community improvisers who workshop regularly at 7.30pm on Monday nights at the Rusthall Club.although now with the covid pandemic they meet on line using zoom. The workshops are open to all but please enquire first through our contact page. We occasionally hold full day and week end workshops but this is unlikely until later next year.  We are also preparing a play for Rusthall and there will be plenty of opportunity for impro, see Paths and Highways above.  The workshops are led by Jon Oram, though the group  collectively run their own sessions from time to time.  They perform five or six times a year.  The early show were performed 'games' but in recent years they have been developing long form improvisation. Presently the group is exploring more long form improvisation.
Claqueur Impro